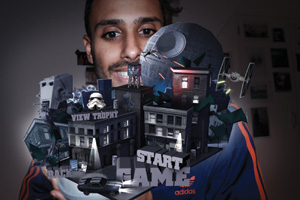 Adidas is describing its newest line of shoes as “the first augmented reality experience in footwear.” To the AR uninitiated, that phrase sounds a bit clunky. How about “the first line of footwear that speaks in tongues?”

More precisely, it’s the first line of sneakers with a coded tongue. Hold up one of the sneakers with its AR-embedded label to a Webcam, and voila — you’re invited into a private, urban, celebrity-and-game-filled virtual world, the Adidas Originals Neighborhood. The first game, based on the Adidas Star Wars collection (created in collaboration with Lucasfilm), debuted in early February, and two more will roll out throughout the spring and summer under the Adidas theme line, “Celebrate originality.”